The Minister of Internal Affairs, Mr. Lucian Nicolae BODE had on Wednesday, May 18th, 2022, in Washington D.C. a meeting with the Secretary of the US Department of Homeland Security, Mr. Alejandro MAYORKAS, on the occasion of the visit that the Romanian dignitary is making in this country, between May 16th and 18th, 2022.

The visit takes place within a year that marks the 25th anniversary of the launch of the Romania-US Strategic Partnership, a significant milestone in bilateral relations between the two states.

During his meeting with his counterpart, Minister BODE stressed upon the importance of further developing the bilateral partnership, through an ongoing dialogue at all levels and close coordination with the US, especially in the current regional context, in order to strengthen the security of the two states.

The discussions reaffirmed the very good cooperation between the Romanian authorities and the US law enforcement agencies in the field of combating organized crime, with a special emphasis on combating illegal migration and cybercrime. At the same time, it was agreed to intensify the exchange of information, in this regard being discussed the prospect of establishing in Bucharest a regional center for the investigation of cross-border crimes.

The bilateral agenda also included the situation in Ukraine, namely the measures taken by the Romanian authorities to prevent the risks of organized crime, such as trafficking in human beings, as well as to protect vulnerable people.

Another issue addressed during the meeting was related to Romania’s accession to the Visa Waiver Program, which remains a priority of the Romanian Government. The Romanian official representative conveyed the desire of the Romanian authorities to intensify the dialogue with the American counterpart in this case, so that the Romanian citizens can travel to the USA without visas as soon as possible. „From the position of a stable and reliable ally of the USA, I hope to have concrete progress as soon as possible regarding Romania’s accession to the Visa Waiver Program. My counterpart assured me of all his support in this regard „, the Romanian dignitary declared. 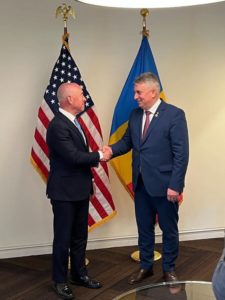