Following the tests performed at national level, compared to the last report, 3.302 new cases of people infected with SARS – CoV – 2 (COVID – 19) were registered, these being cases that had not previously had a positive test. The distribution by counties of the total and new cases can be found in the table below. 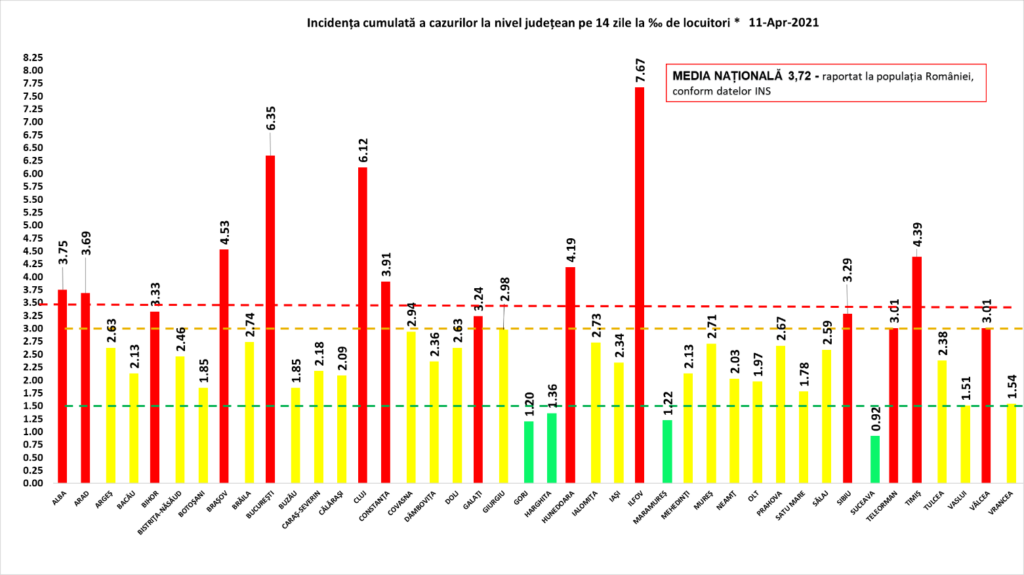 Apart from the newly confirmed cases, following the retesting of patients who were already positive, 439 people were reconfirmed positively. The distribution by county of these cases can be found in the table below.

To date, 25. 135 people diagnosed with SARS-CoV-2 infection have died.

In the specialized health units, the total number of persons hospitalized with COVID-19 is 13.500.  Of these, 1. 531 are hospitalized at Intensive Care Units.

Also, since the last information made by GCS, the results of 607 RT-PCR tests have been reported, processed before the last 24 hours and transmitted until April 11 a.c.

In the last 24 hours, 2.794 calls were registered to the unique emergency number 112

As a result of the violation of the provisions of Law no. 55/2020 regarding some measures for preventing and combating the effects of the COVID-19 pandemic, the police and gendarmes applied, on April 10th, 7.065 sanctions for minor offenses, amounting to 1.649.500 lei.

Also, through the competent structures of the Police, 9 criminal files were drawn up yesterday to thwart the fight against diseases, a deed provided and punished by art. 352 Penal Code.