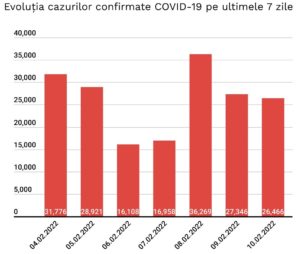 Regarding the “new cases not allocated by counties”, we specify that their number is determined by the changes brought to the electronic platform through which the test results for the new coronavirus are reported and centralized. Thus, according to the new methodology, the testing centers directly introduce the results of the tests performed, following that the epidemiological investigation will be performed at the level of the Public Health Directorates and the positive cases will be assigned to the county / locality to which the infected persons belong. 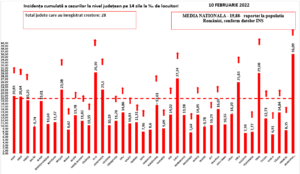 Until today, a total of 2.508.860 cases of infection with the new coronavirus (COVID-19) have been registered in Romania on February 10th, of which 82.550  are from re-infected patients, tested positive for more than 180 days days after the first infection.

Apart from the newly confirmed cases, following the retesting of patients who were already positive, 1.169 people were reconfirmed positively. The distribution by county of these cases can be found in the table below.

Until today, 61.231 people diagnosed with SARS-CoV-2 infection have died.

136 of the registered deaths are of some patients who presented with comorbidities, and for 3 deceased patients no comorbidities have been reported so far.

There was reported 1 death before the reference interval, which occurred in Mureș, in January 2022.

In the specialized health units, the number of people hospitalized in wards with COVID-19 is 10.987, 337 less than the previous day. Also, 1.146 people are hospitalized at ATI, 26 more than the day before. Of the 1.146 patients admitted to ATI, 983 aren’t vaccinated.

Out of the total number of hospitalized patients, 763 are minors, 742 being hospitalized in wards, 52 less than the previous day and 21 in ATI, 4 fewer than the day before.

As a result of the violation of the provisions of Law no. 55/2020 on some measures to prevent and combat the effects of the COVID-19 pandemic, on February 9th, the police and gendarmes applied 1.144 sanctions, amounting to 242.250 lei.