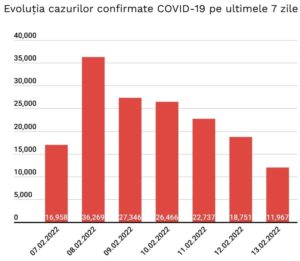 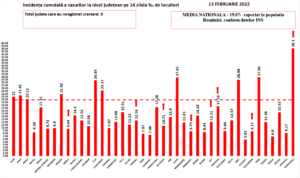 Until today, a total of 2.562.315 cases of infection with the new coronavirus (COVID-19) have been registered in Romania on February 11th, of which 89.002 are from re-infected patients, tested positive for more than 180 days days after the first infection.

Apart from the newly confirmed cases, following the retesting of patients who were already positive, 696 people were reconfirmed positively. The distribution by county of these cases can be found in the table below.

Until today, 61.601 people diagnosed with SARS-CoV-2 infection have died.

Between 12.02.2022 (10:00) – 13.02.2022 (10:00) were reported by the INSP 81 deaths (47 men and 34 women), of which one prior to the reference interval, of some patients infected with the new coronavirus, hospitalized in hospitals in Alba, Arad, Argeș, Bacău, Bistrița-Năsăud, Botoșani, Caraș-Severin, Călărași, Cluj, Constanța, Dâmbovița, Dolj, Giurgiu, Gorj, Harghita, Iași, Mehedinți, Neamț, Olt, Prahova, Sălaj, Satu Mare, Sibiu, Suceava, Timiș, Vaslui, Vâlcea and Bucharest.

80 of the registered deaths were of some patients which presented comorbidities and one deceased patient didn’t have comorbidities.

There was reported one death prior to the reference interval, which occurred in Giurgiu in January 2022.

In the specialized health units, the number of people hospitalized in wards with COVID-19 is 10.586, 308 more than the previous day. Also, 1.141 people are hospitalized at ATI, 28 less than the day before. Of the 1.141 patients admitted to ATI, 976 aren’t vaccinated.

As a result of the violation of the provisions of Law no. 55/2020 on some measures to prevent and combat the effects of the COVID-19 pandemic, on February 12th, the police and gendarmes applied 1.472 sanctions, amounting to 393.000 lei.