To date, on November 30th, 1,779,667 cases of infection with the new coronavirus (COVID – 19) have been registered in Romania, of which 10,325 are from reinfected patients, tested positive for more than 180 days after the first infection. .

In the last 24 hours, 1,622 new cases of people infected with SARS – CoV – 2 (COVID – 19) were registered, of which 33 are of reinfected patients, tested positive for more than 180 days after the first infection. 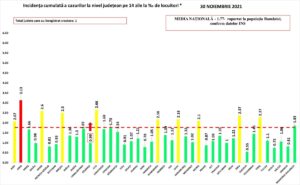 Apart from the newly confirmed cases, following the retesting of patients who were already positive, 369 people were reconfirmed positively. The distribution by county of these cases can be found in the table below:

To date, 56,529 people diagnosed with SARS-CoV-2 infection have died.

144 of the registered deaths were of patients who presented comorbidities, 3 deceased patient did not register any comorbidities.

Of the total of 147 patients who died, 132 were unvaccinated and 15 were vaccinated. The 15 vaccinated deceased patients were in the 40-49 age group and in the over 80 age group. All of the vaccinated patiens who died presented comorbidities.

In the specialised health units, the total number of people hospitalised with COVID-19 is 7,172. Of these, 1,146 are hospitalised at Intensive Care Units. Of the 1,146 patients admitted to ATI, 110 have a certificate attesting to vaccination.

Out of the total number of hospitalised patients, 126 are minors, 118 being hospitalised in medical departments and 8 in Intensive Care Units.

As a result of the violation of the provisions of Law no. 55/2020 on some measures to prevent and combat the effects of the COVID-19 pandemic, the police and gendarmes applied, on November 29th, 2,097  sanctions for minor offences, amounting to 472.630 lei.

Also, through the competent structures of the Police, one criminal files was drawn up yesterday to thwart the fight against diseases, a deed provided and punished by art. 352 of the Penal Code.