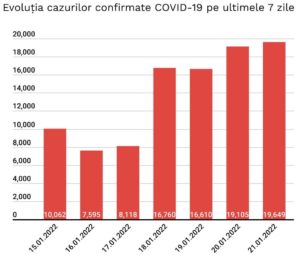 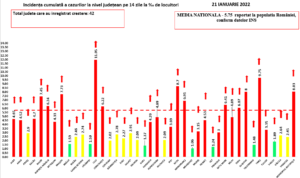 Until today, a total of 1.983.670 cases of infection with the new coronavirus (COVID-19) have been registered in Romania on January 21st, of which 27.903 are from re-infected patients, tested positive for more than 180 days days after the first infection.

Apart from the newly confirmed cases, following the retesting of patients who were already positive, 784 people were reconfirmed positively. The distribution by county of these cases can be found in the table below.

Until today, 59.477 people diagnosed with SARS-CoV-2 infection have died.

In the specialized health units, the number of people hospitalized in wards with COVID-19 is 5.405, 460 more than the previous day. Also, 564 people are hospitalized at ICU, 17 more than the day before. Of the 565 patients admitted to ICU, 65 have a certificate attesting the vaccination.

Out of the total number of hospitalized patients, 485 are minors, 473 being hospitalized in wards, 72 more than the previous day and 12 in ICU, one less than the day before.

In today’s report from alerte.ms.ro, for the RT PCR tests there is 1 laboratory that made the first report, so there is a surplus of 492 tests out of the total RT PCR tests performed so far. The laboratory sent explanatory emails to INSP in which they confirmed the data reported in alerte.ms.ro.

This correction does not affect the number of positive people, because each positive test is reported in coronaforms at the time of processing.

The number of positive people today is only the result of tests performed in the last 24 hours.

As a result of the violation of the provisions of Law no. 55/2020 on some measures to prevent and combat the effects of the COVID-19 pandemic, on January 21th, the police and gendarmes applied 1.220 sanctions, amounting to 246.800 lei.