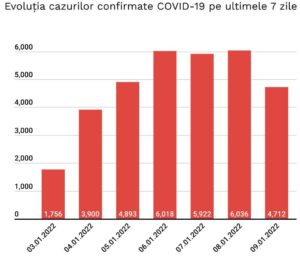 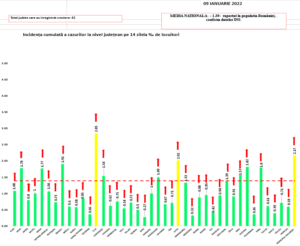 Until today, January 9th, a total of 1.844.537 cases of infection with the new coronavirus (COVID-19) have been registered in Romania, of which 14.229 are from re-infected patients, tested positive for more than 180 days. days after the first infection.

The number of cured patients is the same as the previous day, January 8th, for today it could not be calculated due to some corrections that appeared in the dedicated electronic platform.

Apart from the newly confirmed cases, following the retesting of patients who were already positive, 227 people were reconfirmed positively. The distribution by county of these cases can be found in the table below.

Until today, 59.001 people diagnosed with SARS-CoV-2 infection have died.

Out of a total of 14 patients who died, only one was vaccinated, aged between 60-69 years and had comorbidities.

In the specialized health units, the number of people hospitalized in wards with COVID-19 is 2.565, 141 more than the previous day. Also, 408 people are hospitalized at Intensive Care Units, 2 more than the day before. Of the 408 patients admitted to ICU, 30 have a certificate attesting to vaccination.

Out of the total number of hospitalized patients, 108 are minors, 99 being hospitalized in wards, 6 more than the previous day and 9 in ICU similar to the day before.

As a result of the violation of the provisions of Law no. 55/2020 on some measures to prevent and combat the effects of the COVID-19 pandemic, on January 8th, the police and gendarmes applied 1.342  sanctions, amounting to 384.567 lei.